Some of you may remember past staff Robyn Davies, Faith Williams and Elspeth Wilson 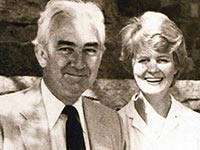 It is with shock and sadness that we learnt of the passing of Robyn, in September, following a short illness.

Robyn joined her husband Lawrie (staff 1969 – 1981) at Wetpups as a Form 3 and Art teacher. Innovative and inspirational, she was involved in many areas of school life. She ran Scripture Union and a Bible study group for the domestic staff. A superb singer herself, she co-produced many musicals.

On her return to WPPS, she started a junior computer centre, and taught IT from Grades N to 5, creating her own syllabus. Such was her expertise in this field that ‘Cybergran’, as she was nicknamed, was invited to contribute to an international symposium on teaching young children to program, convened in London by Mark Shuttleworth.

Robyn will be remembered by her colleagues and the hundreds of young men that she taught for her wisdom, deep faith and empathy. She will be very much missed. Our sincere sympathy goes to her twin sister Wendy Bennet (staff 1975-1999), her children, Stephen, Ceri (staff 2003-2006) and Alun, and the extended family. Faith Williams started at WPPS running the aftercare before becoming a Grade 4 class teacher. She coached the General Knowledge Team and managed the Chess Teams. Thereafter, she became the Senior School Librarian and co-ordinated the enrichment classes for small groups. Faith was actively involved in One-to-One and was in charge of the Tombola Stall at Fun Night for many years. As a person, she was selfless, principled and went beyond the call of duty in all aspects of school life. She always took an interest in the boys and staff, which was shown in many kindly gestures. Faith retired from WPPS in 2014 after 19 years of loyal and dedicated service, but still remained very much part of the WPPS family. Our thoughts and prayers are with her husband David, and son Rhys.

Elspeth was an enthusiastic and supportive parent of the school for many years, involving herself in the library, lost property and play costumes, but she will be remembered with gratitude for her professional involvement as an optometrist. For nearly thirty years, she did the entry level vision screening of our boys, following up with further assessment if needed. She had a wonderful and reassuring manner with the boys, making the testing fun and enjoyable. She helped countless families with her advice and reassurance. She will be greatly missed by all.