Congratulations to Graham Knoop (2000), captain of the False Bay RFC, who received his colours and was declared Player of the Year recently.

Good to have news of the Samodien brothers. Yazeed (1991) has a post with the government offices in Cape Town and has a baby daughter, while brother Adeeb (1993) works in IT and has two children.

Sean Whitehead (1994) is the proud father of 16-month-old Tyler. His lifelong friend and classmate, Robert Reading (1994), was married in Canada in December.

Mark Day (1999) moved to the UK in 2015 and is working for Unilever’s sustainable sourcing programme, which is responsible for Unilever’s commitment to source 100% raw agricultural material sustainably by 2020.

While still in Cape Town, he worked with Cape Nature Conservation, where one of his tasks was to protect and monitor the endangered Western Leopard Toad.

News from muso alumnus, Adrian Fowler – from 2014 to 2016, he performed with iScream & the Chocolate Stix, a previously SAMA-award-winning hip hop group. 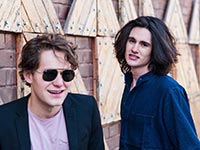 One of his original groups, Slow Jack, a pop rock band, started in 2016. Their debut single, “Love To Dream”, went to #1 on 5FM, and this past New Year’s Eve they performed at Kirstenbosch Gardens alongside Johnny Clegg to a capacity 6000-strong crowd.

The most active group he is performing with is an Indie Pop Rock band called Early Hours, all Bishops old boys. They are currently touring SA extensively and are returning to Canada later this year for their second international tour, performing at the Canada Indie Week Conference, with a show in NYC along the way. Early Hours was the first South African band in history to reach over a million plays on SoundCloud with their single “Smells like Summer”.

Below is a link to the Early Hours page, with details of upcoming shows, and links to music, videos and tickets for your perusal.
https://www.facebook.com/EarlyHoursOfficial/

Congratulations to Chris Cooke (1999), who married Nichola James on 23 February in Elgin.

Angus Thring was awarded first prize and a gold medal at the South African Physics Olympiad. This is run annually by the South African Institute of Physics (SAIP) for the top performing students in the National Science Olympiad. The exam focuses on pure physics and is set at a higher level than the Science Olympiad. Angus scored the top mark in the exam (86%). This is a remarkable achievement in a very difficult exam! The medal was presented to Angus in a small ceremony in the principal’s office by Case Rijsdijk, the convener of the competition, and Professor Patrick Woudt, president of the SAIP and head of the Astronomy Department at the University of Cape Town.

Kyle Cato, 16, has become the first South African to receive the Scouts of the World Award. https://www.southernsuburbstatler.co.za/news/teen-scout-lands-award-for-tackling-global-issues-8005270

Cameron Chadwick is a young artist who has taken his passion for animals and art, and created a business sculpting and bronzing these gorgeous creatures. 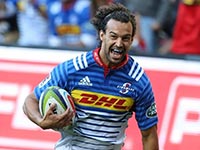 Max Godfrey raised R50,565 to help save the rhino. 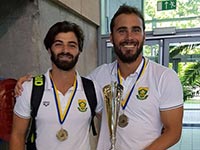 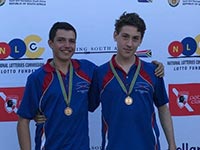 Nicholas McAdam represented the Western Province as an U16 rower, winning a gold medal at SA Senior Rowing Champs in the Men’s “B” Double against university crews.

David Perrott – Founder member of Gravity Ideas – a behavioural science company, and award winners in 2016 and 2017. They were afforded the honour of being recognised with a BX Practitioner’s Award in Singapore. https://www.gravityideas.com/thinking/bxawards

Alex Stewart was selected for the South African Men’s hockey team. Alex captained Bishops, played SA Schools, and recently captained the SA U21 team at the Junior World Cup. He currently captains the Stellenbosch University side.

Thanks to alumnus, Cameron Chadwick, who is currently attending St Andrew’s College and who recently achieved his provincial colours for hockey. Cameron offered up several hours of his own school holiday time to assist with the coaching of our U11, U12 & U13 hockey sides. Thank you and well done, Cameron.

Several other alumni have been coaching sport at WPPS this year. Michael Inskip, James Macdonald and Alex Raubenheimer – thanks, chaps! 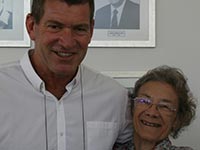 Hilary Lown, past staff member,  celebrated her 80th birthday in the Centenary Pavilion with a sumptuous tea and fellow WPPS teaching colleagues. It was a wonderful reunion for many.